katrina and the waves

katrina and the waves

Katrina And The Waves were a successful, female-fronted, four piece rock band during the 1980s and 90s, built around the infectiously melodic, sixties-influenced songs of former Soft Boy guitarist Kimberley Rew and the distinctively powerful vocals of Katrina Leskanich, and were best known for their evergreen, step-lightening 1985 hit single Walking On Sunshine and their landslide 1997 Eurovision Song Contest victory with the song Love Shine A Light.

The band’s earliest incarnation was as the Waves, a group that played in and around Cambridge, England from 1975-77 and featured guitarist Kimberley Rew and drummer Alex Cooper. This line up of the Waves never issued any recordings, and broke up when Rew left to join The Soft Boys, who left their mark as a twin guitar-led psychedelic rock quartet who in their short, commercially unsuccessful but influential existence managed to create an idiosyncratic canon, essentially two albums, A Can of Bees and Underwater Moonlight , based around the charmingly off-kilter songwriting of frontman Robyn Hitchcock, a whimsical Englishman in the Syd Barrett/Kevin Ayres mould, but out of step with the prevalent pub rock and punk of the time. Hitchcock has gone on to enjoy a cult solo career of steadily building success and now records and tours with the Minus Three, featuring REM’s Peter Buck.

The Waves folded when Cooper joined pop/soul cover band Mama’s Cookin’ in 1979. This band featured American Katrina Leskanich on vocals and guitar; her then-boyfriend Vince de la Cruz on guitar (both self-confessed “US airforce brats”), Cooper on drums and Bob Jakins on bass. Mama’s Cookin’ gigged steadily across England over the next two years, developing their chops on the US military bases circuit, where their trademark covers of classic American Sixties R&B, Motown and Spector-helmed hits and Seventies rock went down particularly well and served their arrangement skills well for the future. After the demise of the Soft Boys in 1981, Rew renewed relations with Cooper, who convinced Rew to join Mama’s Cookin’, which was shortly re-named the Waves after the pair’s original combo. 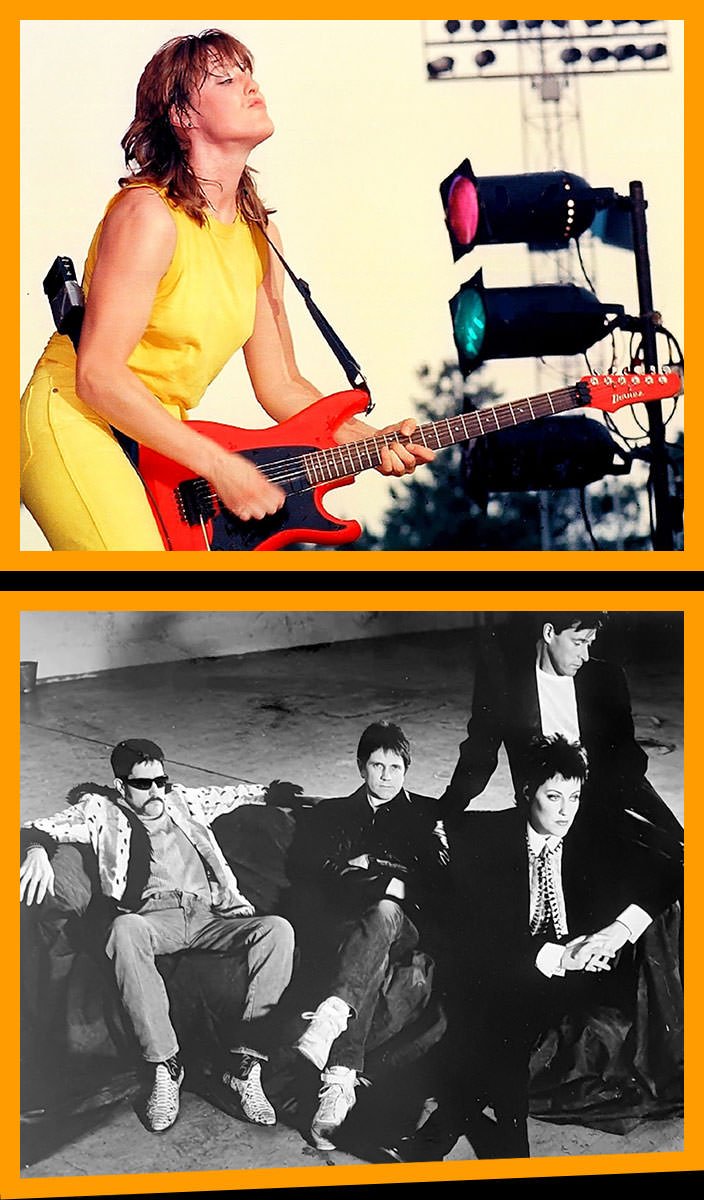 The Waves were initially a five piece, fronted by singer/songwriter/guitarist Rew, who brought a wealth of original material to the band. Leskanich was temporarily sidelined, backing Rew’s vocals and singing lead on only the Waves’ repertoire of covers, but gradually Rew recognised the power and quality of Leskanich’s voice and began writing songs specifically for her to sing and by the end of The Waves’ first year, Leskanich was the band’s main vocalist.

In 1982 The Waves released debut single Nightmare with B-side Hey, War Pig! Both tracks were collected later that year on Rew’s The Bible Of Bop solo album; the latter cited by Velvet Crush’s Ric Menc as “the greatest protest song ever” followed by the Waves’ debut Shock Horror EP. And then in a crucial development Jakins quit, de la Cruz moved to bass guitar and the band renamed themselves Katrina and the Waves.

In early 1983, the band pooled their meagre resources to fund the recording of an album’s worth of original material – all songs written by Rew and, bar two, sung by Leskanich – intended to be sold at gigs. Numerous labels on both sides of theAtlantic were approached, but only Ralph Alonso at Canadian indie Attic Records, which had previously released recordings by the Soft Boys, responded with an offer. Consequently, Katrina And The Waves’ debut album Walking On Sunshine was released only in Canada, despite the band being based in the UK. The resulting critical praise and, more importantly, radio play, for the title track in particular, afforded a Canadian tour, and due to their well-honed live skills, their fanbase grew steadily.

1984 saw a follow-up album, Katrina And The Waves 2, again only in Canada, but de la Cruz’s contribution included the Canadian airplay hit Mexico, the excellent Do You Want Crying and One Woman.

The band’s reputation was growing, fuelled by months of travelling and gigging and the added mystique of their releases being on import in the UK and USA, but, as is often the case, it was the kind of lucky break that money can’t buy which helped to put them on the music industry map. Los Angeles-based female four-piece the Bangles (nee the Supersonic Bangs) chose to cover one of Rew’s songs on All Over The Place, their second album, but first for new label Columbia Records. Their version of Going Down To Liverpool, originally on K&TW’s debut album, was released at the end of 1984 and, with the help of an odd-ball video starring Leonard Nimoy, became a minor MTV and radio playlist hit and, drawing the attention of a certain Prince Rogers Nelson who wrote Manic Monday, the Bangles’ next single and first hit. This pricked up the ears of various labels (at last) and the band were quickly snapped up worldwide by Capitol Records.

1985 saw the first fruits of this new relationship – single Walking on Sunshine, re-worked with additional horns, was an instant radio-friendly smash, a Top 10 hit in the UK, the USA, Canada and Australia among other places. More recently, the song was covered by Aly & AJ for Walt Disney’s 2005 movie Herbie: Fully Loaded, starring Lindsay Lohan. It was followed a month later by their eponymous third album, comprising re-recorded versions of the best songs from the previous two, which went Top 30 in both the UK and US. Second single Do You Want Crying went Top 40 in America and the band was nominated for a “Best New Artist” Grammy – the Waves had finally arrived! 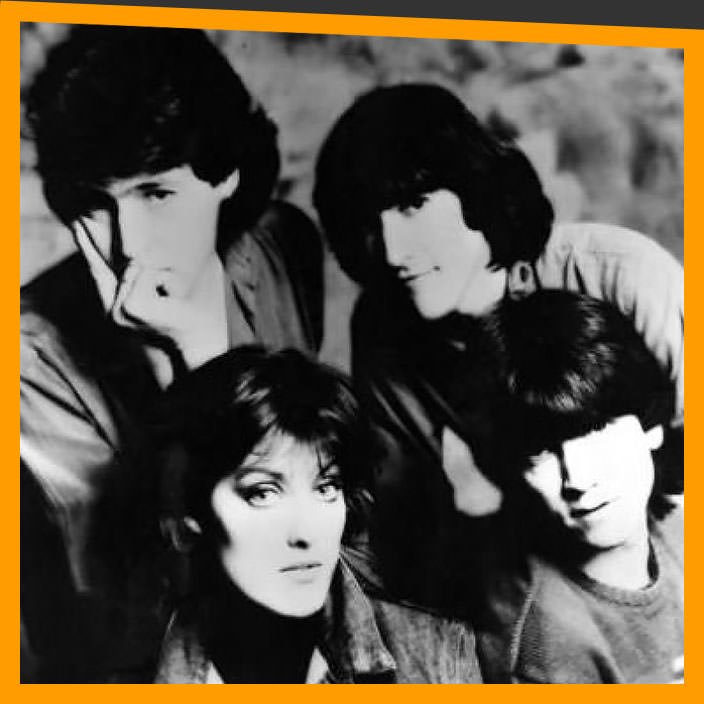 Fourth album Waves failed to generate the same critical response nor massive commercial success and many pointed to the fact that Rew composed only two of the ten songs on this collection, although the Rew-penned Is That It received radio play and the de la Cruz-written Sun Street was a UK Top 30 hit. Capitol Record didn’t help matters much by dropping the band.

The band re-grouped and by 1989 had a new deal with SBK Records, which released the more rock-oriented Break Of Hearts album. Despite catchy singles Rock’n’Roll Girl and That’s The Way – the latter a US Top 20 Leskanich/Rew co-write- it was their only album for the label. “That was our big hair period,” Leskanich laughs now. “SBK told us that they could see us as a stadium band, Bryan Adams style, and Kim was coming up with this stuff that was perfect for rock radio.” “We’ve never been successful enough to be immune from the influences of producers and marketing men,” concedes Rew. “The more we fell for those 80s trademarks, the more we diluted the band.”

The band re-focused east of the Atlantic, releasing three albums- 1991’s Pet The Tiger on Virgin Records (the title track a co-write with Liam Sternberg, composer of The Bangles’ hit Walk Like An Egyptian), 1993′ Edge Of The Land (which featured cracking compositions I’m In Deep and The Beauty Myth from producer Phil Thornalley) and 1995’s Turn Around, both on Polydor Records in the UK, mainland Europe and Canada.

Unashamedly grabbing the chance to represent the UK in the 1997 Eurovision Song Contest two days after Labour’s general election triumph, Katrina And The Waves’ stunning song Love Shine A Light destroyed the kitsch competition, winning by a record points margin and making them the most credible victors since ABBA’s Waterloo. A new deal with Warners saw Love Shine A Light also become their highest charting UK single, reaching #3- mystifyingly, it was never released in the USA- and ninth album Walk On Water followed quickly. On the back of this second bite of the cherry, EMI Records issued Walking On Sunshine: The Best Of Katrina And The Waves, an excellent compilation of their Capitol/EMI songs from 1985 to 1991.

Sadly, within a year, Leskanich quit the band. After playing several shows with Lynda Hayes, one of the UK’s top studio singers, Kimberley, Vince and Alex agreed to put the band on hold, leaving themselves free to pursue other musical avenues. Meanwhile Katrina followed a busy career as radio DJ, in the musical Leader of the Pack, and as a solo singer. In 2003, Bongo Beat Records, an indie launched by the band’s original A&R man Ralph Alonso, released the album The Original Recordings 1983-1984, compiling the songs from their two Attic Records albums, along with a bonus DVD containing promotional concert footage from the early ’80s, which has gone some way to making up for the lack of a classic K&TW live collection.

In 2007 Celine Dion, no less, interpreted of Rew’s That’s Just The Woman In Me on her Taking Chances album, illustrating, once again, the lasting quality and coverability of Rew’s songs. From The Bangles to Celine Dion- two very different sides of the multi-faceted musical spectrum inhabited by the songs of Kimberley Rew. What’s surprising is that more of his songs haven’t been re-worked by more artists!

katrina
and the
waves